I’m so glad the IQF came back to Chicago this year! It’s a fairly quick drive from home – or it would be if there wasn’t construction, an obstinate GPS, a couple of wrong turns, and my failure to reprogram the GPS for HOME once it found the satellite signal. Yes, we drove for 30 minutes and ended up right back where we started. Major facepalm.

We arrived at the show just after the doors opened, and although it was far from empty, I was surprised at how few people were there. The parking garage we used was almost empty both when we arrived and when we left at 4:00pm. In past years this parking structure has been full to overflowing. I was able to get clear photos of the display quilts, while in the past I’ve had to settle for pictures with other visitors in them. Speaking of photos, I was also disappointed in the lighting. I am not particularly skilled with my camera and I’m sure I could have played with the settings to get better results, but I wasn’t thrilled with the quality of my photos. They aren’t awful, but they’ve been a lot better.

The photography guidelines for the show say that we can post photos on our personal websites, etc., as long as they are not shared where they can be printed on items that can be purchased. I had to change my Flickr setting so I am the only person who can print from my photostream, which isn’t necessarily a bad thing. Also, any shared photos “must include appropriate credit for each quit artist and note that the photos were taken at International Quilt Festival.”

So far I have about 2/3 of the photos uploaded to Flickr. Also, each quilt photo in the Flickr set is followed by a photo of the page that was displayed with it, giving additional information about the quilt and its maker(s). 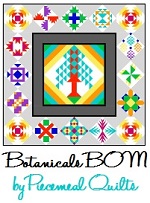